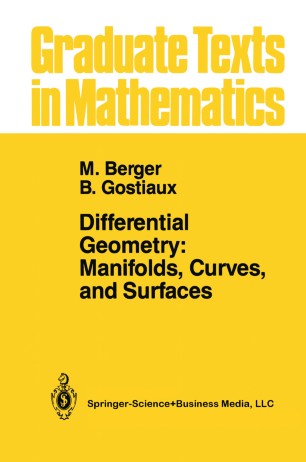 This book consists of two parts, different in form but similar in spirit. The first, which comprises chapters 0 through 9, is a revised and somewhat enlarged version of the 1972 book Geometrie Differentielle. The second part, chapters 10 and 11, is an attempt to remedy the notorious absence in the original book of any treatment of surfaces in three-space, an omission all the more unforgivable in that surfaces are some of the most common geometrical objects, not only in mathematics but in many branches of physics. Geometrie Differentielle was based on a course I taught in Paris in 1969- 70 and again in 1970-71. In designing this course I was decisively influ­ enced by a conversation with Serge Lang, and I let myself be guided by three general ideas. First, to avoid making the statement and proof of Stokes' formula the climax of the course and running out of time before any of its applications could be discussed. Second, to illustrate each new notion with non-trivial examples, as soon as possible after its introduc­ tion. And finally, to familiarize geometry-oriented students with analysis and analysis-oriented students with geometry, at least in what concerns manifolds.