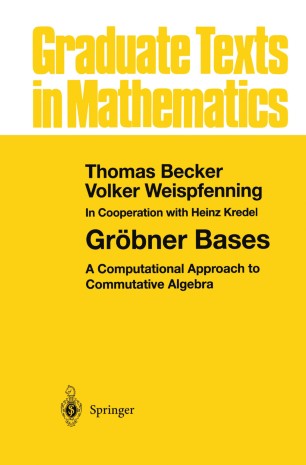 A Computational Approach to Commutative Algebra

The origins of the mathematics in this book date back more than two thou­ sand years, as can be seen from the fact that one of the most important algorithms presented here bears the name of the Greek mathematician Eu­ clid. The word "algorithm" as well as the key word "algebra" in the title of this book come from the name and the work of the ninth-century scientist Mohammed ibn Musa al-Khowarizmi, who was born in what is now Uzbek­ istan and worked in Baghdad at the court of Harun al-Rashid's son. The word "algorithm" is actually a westernization of al-Khowarizmi's name, while "algebra" derives from "al-jabr," a term that appears in the title of his book Kitab al-jabr wa'l muqabala, where he discusses symbolic methods for the solution of equations. This close connection between algebra and al­ gorithms lasted roughly up to the beginning of this century; until then, the primary goal of algebra was the design of constructive methods for solving equations by means of symbolic transformations. During the second half of the nineteenth century, a new line of thought began to enter algebra from the realm of geometry, where it had been successful since Euclid's time, namely, the axiomatic method.