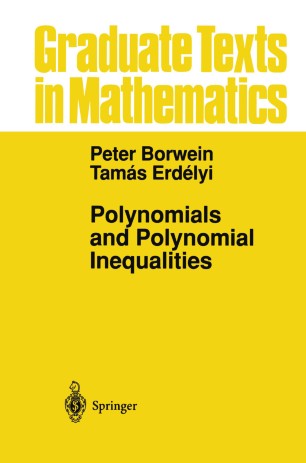 Polynomials pervade mathematics, virtually every branch of mathematics from algebraic number theory and algebraic geometry to applied analysis and computer science, has a corpus of theory arising from polynomials. The material explored in this book primarily concerns polynomials as they arise in analysis; it focuses on polynomials and rational functions of a single variable. The book is self-contained and assumes at most a senior-undergraduate familiarity with real and complex analysis.
After an introduction to the geometry of polynomials and a discussion of refinements of the Fundamental Theorem of Algebra, the book turns to a consideration of various special polynomials. Chebyshev and Descartes systems are then introduced, and Müntz systems and rational systems are examined in detail. Subsequent chapters discuss denseness questions and the inequalities satisfied by polynomials and rational functions. Appendices on algorithms and computational concerns, on the interpolation theorem, and on orthogonality and irrationality conclude the book.

"This is a wonderful book which is strongly recommended for use in a class with students who are willing to work on the proofs, rather than to digest fully prepared and worked out proofs and examples." Jnl of Approximation Theory
Buy options