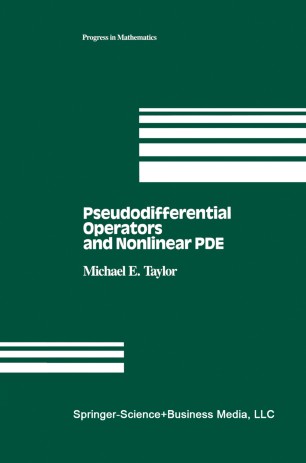 Part of the Progress in Mathematics book series (PM, volume 100)

One goal has been to build a bridge between two approaches which have been used in a number of papers written in the last decade, one being the theory of paradifferential operators, pioneered by Bony and Meyer, the other the study of pseudodifferential operators whose symbols have limited regularity. The latter approach is a natural successor to classical devices of deriving estimates for linear PDE whose coefficients have limited regularity in order to obtain results in nonlinear PDE.

After developing the requisite tools, we proceed to demonstrate their effectiveness on a range of basic topics in nonlinear PDE. For example, for hyperbolic systems, known sufficient conditions for persistence of solutions are both sharpened and extended in scope. In the treatment of parabolic equations and elliptic boundary problems, it is shown that the results obtained here interface particularly easily with the DeGiorgi-Nash-Moser theory, when that theory applies.

To make the work reasonable self-contained, there are appendices treating background topics in harmonic analysis and the DeGiorgi-Nash-Moser theory, as well as an introductory chapter on pseudodifferential operators as developed for linear PDE.

The book should be of interest to graduate students, instructors, and researchers interested in partial differential equations, nonlinear analysis in classical mathematical physics and differential geometry, and in harmonic analysis.