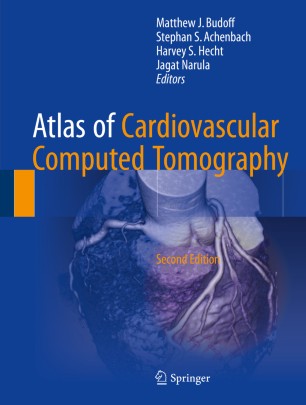 This atlas is a comprehensive visual reference for the use of cardiovascular computed tomography (CT) containing photomicrographs, anatomic illustrations, tables, and charts paired with extensive legends and explanations that are supplemented by extensive research, peer-reviewed articles, and textbooks.

In addition to providing historical perspective and current direction for CT, this new edition of ​Atlas of Cardiovascular Computed Tomography 2e focuses on research involving coronary artery diseases and anomalies, congestive heart failure, atherosclerotic plaques and asymptomatic disease, as well as imaging techniques, including preparation, acquisition, and processing, involving the great vessels and carotids, the peripheral vasculature, and coronary and pulmonary veins. The increasing role of CT in the emergency room and in private cardiology practice is also reviewed thoroughly, making this an essential read for all involved in cardiac imaging, cardiology and emergency medicine.​

Matthew J. Budoff is an expert on Coronary Artery Calcification (CAC) and CT Angiography. He is recognized as a leader in the development of CAC Scoring and an innovator in the non-invasive objective detection methods for cardiac disease. He is an investigator in many large pharmaceutical trials and multicenter studies funded by the National Institutes of Health.
Dr. Budoff’s research is devoted to advancing procedures that can help doctors identify patients early that are at high-risk for cardiac events and progression of coronary calcium. This early detection can lead to patients being placed on the correct therapeutic path to prevent a heart attack. Additionally, Dr. Budoff’s research focuses on how to maximize the utility of non-contrast CT scans of the heart. His team has shown that supplementary measurements can be evaluated for thoracic aortic calcification, aortic valve calcification, mitral annular calcification, pericardial fat, liver fat, m
yocardial scar and bone density.
Stephan S. Achenbach is the Chairman of Cardiology and a Professor of Medicine at the University of Erlangen, Germany. His research interests focus on cardiovascular imaging, mainly computed tomography, for the early detection and characterization of coronary atherosclerosis and for the support of coronary and cardiovascular interventional procedures.
Dr. Achenbach was the Founding President of the SCCT from 2005-2007, and served as a Vice President of the ESC for the 2014-2016 period. He is currently a Board Member of ESC and  Chair of the Congress Program Committee and serves as the Editor-in-Chief of the Journal of Cardiovascular Computed Tomography. He has received several awards, including the Jan Brod Award for Clinical Research of the Medical School of Hannover, Germany (1999), the Thomas C. Cesario Distinguished Visiting Professorship Award from the University of California Irvine School of
Medicine (2007), the Simon Dack Award from the American College of Cardiology (2009), the Gold Medal of the Society of Cardiovascular Computed Tomography (2015), as well as the Sir Godfrey Hounsfield Memorial Award of the British Institute of Radiology (2016).
Harvey S. Hecht is an internationally recognized expert in cardiac imaging and preventive cardiology, and is the author of more than 100 publications in peer reviewed journals. After achieving acclaim as a leader in the fields of nuclear cardiology and stress echocardiography, Dr. Hecht pioneered the development of noninvasive coronary computed tomographic angiography (CTA) and is a driving force behind CTA guided percutaneous coronary intervention and the relationship between CTA and intravascular ultrasound (IVUS). He was the first to demonstrate the poor relationship between risk factors and atherosclerosis.
Jagat Narula is Professor of Medicine and Philip J. and Harriet
L. Goodhart Chair in Cardiology, and the Director of Cardiovascular Imaging Program in Mount Sinai’s Zena and Michael A. Wiener Cardiovascular Institute and the Marie-Josée and Henry R. Kravis Center for Cardiovascular Health. He is the Associate Dean for Global Health at the Icahn School of Medicine at Mount Sinai.
Dr. Narula has specifically contributed to two major areas including heart muscle cell apoptosis in heart failure, and lipid-rich atherosclerotic plaques that are susceptible to rupture and acute coronary events. He has brought novel experimental strategies to bedside and defined their applicability at the community level. He has served on the Advisory Council on Global Prevention of Cardiovascular Diseases of the Institute of Medicine of the National Academies of Sciences.

“The book covers a number of areas, including normal anatomy, uses of cardiovascular CT in different clinical conditions and patient populations, and different disease processes. … The written text is brief, but appropriate. Image quality is excellent and high yield. This is a nice atlas of cardiovascular disorders as manifest on CT. It is particularly useful for exam takers to review classic imaging findings prior to the ABR examinations.” (Tara M Catanzano, Doody's Book Reviews, August, 2018)
Buy options