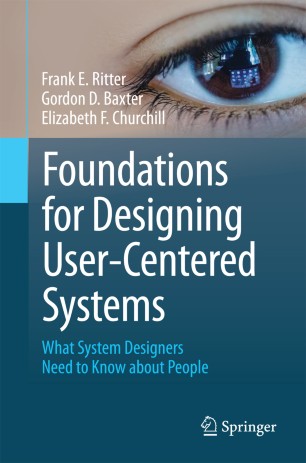 What System Designers Need to Know about People

Interactive technologies pervade every aspect of modern life. Web sites, mobile devices, household gadgets, automotive controls, aircraft flight decks; everywhere you look, people are interacting with technologies. These interactions are governed by a combination of: the users’ capabilities; the things the users are trying to do; and the context in which they are trying to do them. All of these factors have to be appropriately considered during design if you want your technology to provide your users with a good experience.

Foundations for Designing User-Centered Systems introduces the fundamental human capabilities and characteristics that influence how people use interactive technologies. Organized into four main areas—anthropometrics, behaviour, cognition and social factors—it covers basic research and considers the practical implications of that research on system design. Applying what you learn from this book will help you to design interactive systems that are more usable, more useful and more effective.

The authors have deliberately developed Foundations for Designing User-Centered Systems to appeal to system designers and developers, as well as to students who are taking courses in system design and HCI. The book reflects the authors’ backgrounds in computer science, cognitive science, psychology and human factors. The material in the book is based on their collective experience which adds up to almost 90 years of working in academia and both with, and within, industry; covering domains that include aviation, consumer Internet, defense, eCommerce, enterprise system design, health care, and industrial process control.

“The lack of accessible and comprehensive material on human factors for software engineers has been an important barrier to more widespread acceptance of a human-centered approach to systems design. This book has broken down that barrier and I can thoroughly recommend it to all engineers.”

“As a chief architect for large programs, this book has given me access to a variety of new techniques and an extended vocabulary that I look forward to introducing my design teams to.”

“Even if only a proportion of designers and users read this book we will be so much better off. If it gets the circulation it deserves it could change our world–and that very much for the better.”

Frank E. Ritter is a professor in the College of Information Sciences and Technology, professor in the Department of Psychology, and professor in the Department of Computer Science and Engineering at The Pennsylvania State University.  He has published more than 100 articles and conference papers, and edited several books in the area of cognitive modeling, cognitive architectures, human-computer interaction, and learning. He is on the editorial board of Proceedings of the Human Factors and Ergonomics Society and Artificial Intelligence and the Simulation of Behaviour Quarterly.

Gordon D. Baxter is a research fellow in the School of Computer Science at the University of St. Andrews. His background is in human factors and software engineering, with extensive experience in both. His research interests lie in trying to improve the way that systems are developed, and is interested in understanding how decisions and actions taken at all levels (regulatory, organisational, team and individual) affect what happens at the sharp end of the system where the user interacts with the technology His work is influenced by ideas from Resilience Engineering, and Cognitive Systems Engineering which means thinking more functionally about systems as a whole (i.e. people, technology and organisations) rather than taking an atomistic decomposition (or reductionist) type of approach, and focusing on successes as well as failures as a source of learning opportunities.

Elizabeth F. Churchill is the Director of Human Computer Interaction at eBay Research Labs in San Jose, California, and is the Vice President of the Association of Computing Machinery’s Special Interest Group on Human Computer Interaction (ACM SigCHI). She is an ACM Distinguished Scientist, and writes a column for ACM interactions magazine. She is a Distinguished Visiting Scholar at Stanford University’s Media X, the industry affiliate program to Stanford’s H-STAR Institute. Previously she has worked at Yahoo! Research, PARC, and Fuji Xerox’s research lab in Palo Alto, FXPAL.