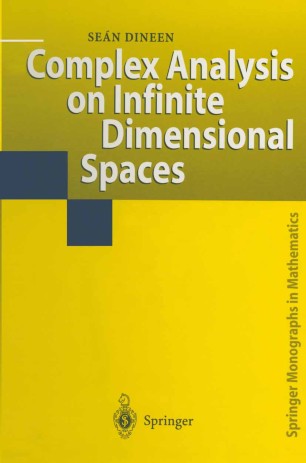 Infinite dimensional holomorphy is the study of holomorphic or analytic func­ tions over complex topological vector spaces. The terms in this description are easily stated and explained and allow the subject to project itself ini­ tially, and innocently, as a compact theory with well defined boundaries. However, a comprehensive study would include delving into, and interacting with, not only the obvious topics of topology, several complex variables theory and functional analysis but also, differential geometry, Jordan algebras, Lie groups, operator theory, logic, differential equations and fixed point theory. This diversity leads to a dynamic synthesis of ideas and to an appreciation of a remarkable feature of mathematics - its unity. Unity requires synthesis while synthesis leads to unity. It is necessary to stand back every so often, to take an overall look at one's subject and ask "How has it developed over the last ten, twenty, fifty years? Where is it going? What am I doing?" I was asking these questions during the spring of 1993 as I prepared a short course to be given at Universidade Federal do Rio de Janeiro during the following July. The abundance of suit­ able material made the selection of topics difficult. For some time I hesitated between two very different aspects of infinite dimensional holomorphy, the geometric-algebraic theory associated with bounded symmetric domains and Jordan triple systems and the topological theory which forms the subject of the present book.