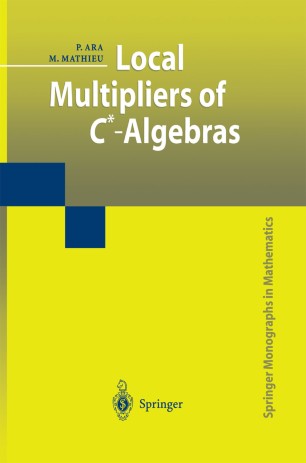 Many problems in operator theory lead to the consideration ofoperator equa­ tions, either directly or via some reformulation. More often than not, how­ ever, the underlying space is too 'small' to contain solutions of these equa­ tions and thus it has to be 'enlarged' in some way. The Berberian-Quigley enlargement of a Banach space, which allows one to convert approximate into genuine eigenvectors, serves as a classical example. In the theory of operator algebras, a C*-algebra A that turns out to be small in this sense tradition­ ally is enlarged to its (universal) enveloping von Neumann algebra A". This works well since von Neumann algebras are in many respects richer and, from the Banach space point of view, A" is nothing other than the second dual space of A. Among the numerous fruitful applications of this principle is the well-known Kadison-Sakai theorem ensuring that every derivation 8 on a C*-algebra A becomes inner in A", though 8 may not be inner in A. The transition from A to A" however is not an algebraic one (and cannot be since it is well known that the property of being a von Neumann algebra cannot be described purely algebraically). Hence, ifthe C*-algebra A is small in an algebraic sense, say simple, it may be inappropriate to move on to A". In such a situation, A is typically enlarged by its multiplier algebra M(A).