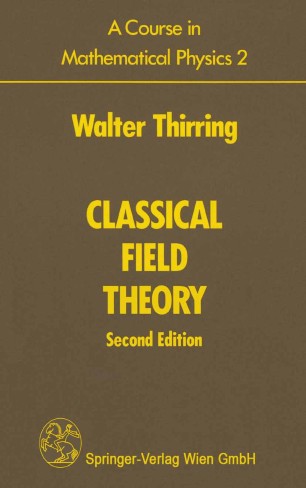 A Course in Mathematical Physics 2

In the past decade the language and methods ofmodern differential geometry have been increasingly used in theoretical physics. What seemed extravagant when this book first appeared 12 years ago, as lecture notes, is now a commonplace. This fact has strengthened my belief that today students of theoretical physics have to learn that language-and the sooner the better. Afterall, they willbe the professors ofthe twenty-first century and it would be absurd if they were to teach then the mathematics of the nineteenth century. Thus for this new edition I did not change the mathematical language. Apart from correcting some mistakes I have only added a section on gauge theories. In the last decade it has become evident that these theories describe fundamental interactions, and on the classical level their structure is suffi­ cientlyclear to qualify them for the minimum amount ofknowledge required by a theoretician. It is with much regret that I had to refrain from in­ corporating the interesting developments in Kaluza-Klein theories and in cosmology, but I felt bound to my promise not to burden the students with theoretical speculations for which there is no experimental evidence. I am indebted to many people for suggestions concerning this volume. In particular, P. Aichelburg, H. Rumpf and H. Urbantke have contributed generously to corrections and improvements. Finally, I would like to thank Dr. 1. Dahl-Jensen for redoing some of the figures on the computer.