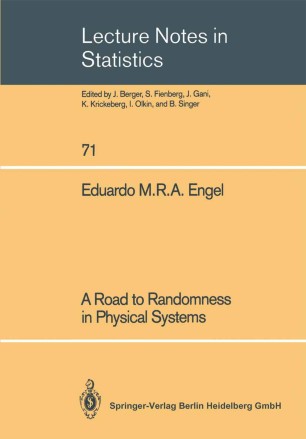 A Road to Randomness in Physical Systems

There are many ways of introducing the concept of probability in classical, i. e, deter­ ministic, physics. This work is concerned with one approach, known as "the method of arbitrary funetionJ. " It was put forward by Poincare in 1896 and developed by Hopf in the 1930's. The idea is the following. There is always some uncertainty in our knowledge of both the initial conditions and the values of the physical constants that characterize the evolution of a physical system. A probability density may be used to describe this uncertainty. For many physical systems, dependence on the initial density washes away with time. Inthese cases, the system's position eventually converges to the same random variable, no matter what density is used to describe initial uncertainty. Hopf's results for the method of arbitrary functions are derived and extended in a unified fashion in these lecture notes. They include his work on dissipative systems subject to weak frictional forces. Most prominent among the problems he considers is his carnival wheel example, which is the first case where a probability distribution cannot be guessed from symmetry or other plausibility considerations, but has to be derived combining the actual physics with the method of arbitrary functions. Examples due to other authors, such as Poincare's law of small planets, Borel's billiards problem and Keller's coin tossing analysis are also studied using this framework. Finally, many new applications are presented.