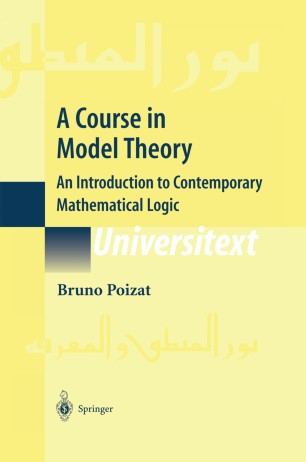 A Course in Model Theory

An Introduction to Contemporary Mathematical Logic

Can we reproduce the inimitable, or give a new life to what has been af­ fected by the weariness of existence? Folks, what you have in your hands is a translation into English of a book that was first published in 1985 by its author, that is, myself, at the end of an editorial adventure about which you will find some details later. It was written in a dialect of Latin that is spoken as a native language in some parts of Europe, Canada, the U. S. A. , the West Indies, and is used as a language of communication between several countries in Africa. It is also sometimes used as a lan­ guage of communication between the members of a much more restricted community: mathematicians. This translation is indeed quite a faithful rendering of the original: Only a final section, on the reals, has been added to Chapter 6, plus a few notes now and then. On the title page you see an inscription in Arabic letters, with a transcription in the Latin (some poorly informed people say English!) alphabet below; I designed the calligraphy myself.