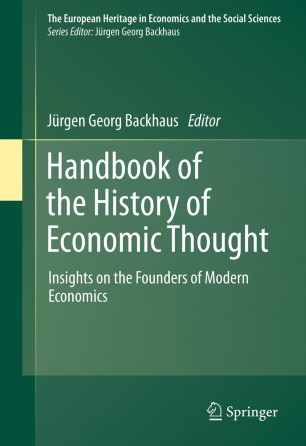 Handbook of the History of Economic Thought

Insights on the Founders of Modern Economics

Part of the The European Heritage in Economics and the Social Sciences book series (EHES, volume 11)

This reader in the history of economic thought challenges the assumption that today’s prevailing economic theories are always the most appropriate ones. As Leland Yeager has pointed out, unlike the scientists of the natural sciences, economists provide their ideas largely to politicians and political appointees who have rather different incentives that might prevent them from choosing the best economic theory.  In this book, the life and work of each of the founders of economics is examined by the best available expert on that founding figure.  These contributors present rather novel and certainly not mainstream interpretations of the founders of modern economics.

The primary theme concerns the development of economic thought as this emerged in the various continental traditions including the Islamic tradition.  These continental traditions differed substantially, both substantively and methodologically, from the Anglo-Saxon orientation that has been dominant in the last century for example in the study of public finance or the very construct of the state itself.  This books maps the various channels of continental economics, particularly from the late-18th through the early-20th centuries, explaining and demonstrating the underlying unity amid the surface diversity.  In particular, the book emphasizes the writings of John Stuart Mill, his predecessor David Ricardo and his follower Jeremy Bentham; the theory of Marginalism by von Thünen, Cournot, and Gossen; the legacy of Karl Marx; the innovations in developmental economics by Friedrich List; the economic and monetary contributions and “struggle of escape” by John Maynard Keynes;  the formidable theory in public finance and economics by Joseph Schumpeter; a reinterpretation of Alfred Marshall; Léon Walras, Heinrich von Stackelberg, Knut Wicksell, Werner Sombart, and Friedrich August von Hayek are each dealt with in their own right.