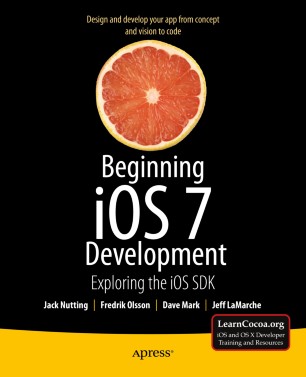 The team that brought you the bestselling Beginning iPhone Development is back again for Beginning iOS 7 Development, bringing this definitive guide up-to-date with Apple's latest and greatest iOS 7 SDK, as well as with the latest version of Xcode.

There’s coverage of brand-new technologies, including a new chapter on Apple's Sprite Kit framework for game development, as well as significant updates to existing material. You'll have everything you need to create your very own apps for the latest iOS devices. Every single sample app in the book has been rebuilt from scratch using latest Xcode and the latest 64-bit iOS 7-specific project templates, and designed to take advantage of the latest Xcode features.

Assuming only a minimal working knowledge of Objective-C, and written in a friendly, easy-to-follow style, Beginning iOS 7 Development offers a complete soup-to-nuts course in iPhone, iPad, and iPod touch programming. The book starts with the basics, walking through the process of downloading and installing Xcode and the iOS 7 SDK, and then guides you though the creation of your first simple application.

From there, you’ll learn how to integrate all the interface elements iOS users have come to know and love, such as buttons, switches, pickers, toolbars, and sliders. You’ll master a variety of design patterns, from the simplest single view to complex hierarchical drill-downs. The confusing art of table building will be demystified, and you’ll learn how to save your data using the iPhone file system. You’ll also learn how to save and retrieve your data using a variety of persistence techniques, including Core Data and SQLite. And there’s much more!

Jack Nutting has been using Cocoa since the olden days, long before it was even called Cocoa. He has used Cocoa and its predecessors to develop software for a wide range of industries and applications, including gaming, graphic design, online digital distribution, telecommunications, finance, publishing, and travel. When he is not working on Mac or iOS projects, he is developing web applications with Ruby on Rails. Nutting is a passionate proponent of Objective-C and the Cocoa frameworks. At the drop of a hat, he will speak at length on the virtues of dynamic dispatch and run time class manipulations to anyone who will listen (and even to some who won t). Nutting is the primary author of Learn Cocoa on the Mac (Apress, 2010) and Beginning iPad Development for iPhone Developers (Apress, 2010). He blogs from time to time at Nuthole.com.