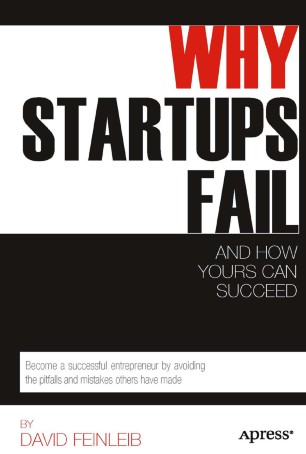 And How Yours Can Succeed

For the want-to-be entrepreneur thinking about taking the leap, the boot-strapped entrepreneur trying to energize a business three or four years in, and the venture-backed entrepreneur trying to scale, Why Startups Fail shows you the key mistakes new ventures make—and how to avoid them. Nearly everyone has an idea for a product they could build or a company they could start. But eight out of 10 new businesses fail within the first three years. Even only one in ten venture-backed startups succeeds, and venture capitalists turn down some 99% of the business plans they see. The odds appear to be stacked against you! But entrepreneurs often make the same avoidable mistakes over and over.

Why Startups Fail can help you beat the odds and avoid the pitfalls and traps that lead to early startup death. It’s easy to point to successes like Apple, Google, and Facebook. But the biggest lessons can come from failure. What decisions were made, and why? What would the founders have done differently? How did one company become a billion-dollar success while another—with a better product and in the same market—fail? Drawing on personal experience as well as the wisdom of the Silicon Valley startup community, serial entrepreneur, venture capitalist, and blogger Dave Feinleib analyzes companies that have come and gone.

In short, powerful chapters, he reveals the keys to successful entrepreneurship: Excellent product/market fit, passion, superb execution, the ability to pivot, stellar team, good funding, and wise spending. In Why Startups Fail, you’ll learn from the mistakes Feinleib has seen made over and over and find out how to position your startup for success. Why Startups Fail:

David Feinleib is the producer of The Big Data Landscape, Big Data Trends, and Big Data TV, all of which may be found on the web at www.BigDataLandscape.com. Mr. Feinleib’s Big Data Trends presentation was featured as "Hot On Twitter" and has been viewed more than 45,000 times on SlideShare. Mr. Feinleib has been quoted by Business Insider and CNET, and his writing has appeared on Forbes.com and in Harvard Business Review China. He is the Managing Director of The Big Data Group.Prior to The Big Data Group, Mr. Feinleib was a general partner at Mohr Davidow Ventures. Mr. Feinleib co-founded Consera Software, which was acquired by HP; Likewise Software, which was acquired by EMC Isilon; and Speechpad, a leader in web-based audio-video transcription. He began his career at Microsoft. Mr. Feinleib holds a BA from Cornell University, graduating summa cum laude, and an MBA from the Graduate School of Business at Stanford University. The author of Why Startups Fail (Apress, 2011), he is an avid violinist and two-time Ironman finisher.