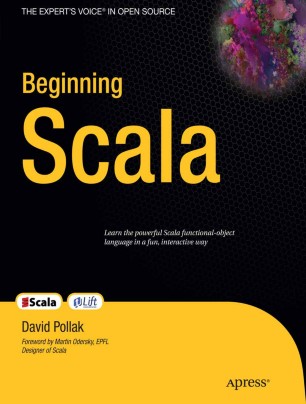 Written by Lift Scala web framework founder and lead Dave Pollak, Beginning Scala takes a down-to-earth approach to teaching Scala that leads you through simple examples that can be combined to build complex, scalable systems and applications.

This book introduces you to the Scala programming language and then guides you through Scala constructs and libraries that allow small and large teams to assemble small components into high-performance, scalable systems. You will learn why Scala is becoming the language of choice for Web 2.0 companies such as Twitter as well as enterprises such as Seimens and SAP.

David Pollak has been writing commercial software since 1977. He wrote the award-winning Mesa spreadsheet, which in 1992 was the first real-time spreadsheet. Wall Street companies traded billions of dollars a day through Mesa. In 1996, David sold his company to CMP Media and became CTO of CMP Media's NetGuide Live and was one of the first large-scale users of Java and WebLogic to power an Internet site. In 1998, David released Integer, the world's first browser-accessible, multiuser spreadsheet. Since 2000, David has been consulting for companies including Hewlett-Packard, Pretzel Logic/WebGain, BankServ, Twitter, and SAP. David has been using Scala since 2006 and is the lead developer of the Lift Web framework.