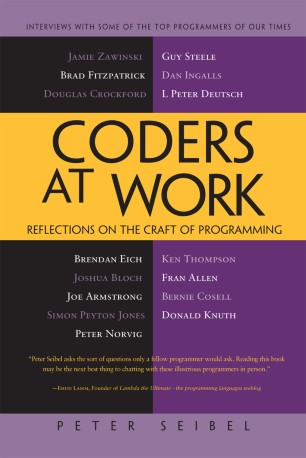 Reflections on the Craft of Programming

Peter Seibel interviews 15 of the most interesting computer programmers alive today in Coders at Work, offering a companion volume to Apress’s highly acclaimed best-seller Founders at Work by Jessica Livingston. As the words “at work” suggest, Peter Seibel focuses on how his interviewees tackle the day-to-day work of programming, while revealing much more, like how they became great programmers, how they recognize programming talent in others, and what kinds of problems they find most interesting.

Hundreds of people have suggested names of programmers to interview on the Coders at Work web site: www.codersatwork.com. The complete list was 284 names. Having digested everyone’s feedback, we selected 15 folks who’ve been kind enough to agree to be interviewed:

Peter Seibel is a serious developer of long standing. In the early days of the Web, he hacked Perl for Mother Jones and Organic Online. He participated in the Java revolution as an early employee at WebLogic which, after its acquisition by BEA, became the cornerstone of the latter's rapid growth in the J2EE sphere. He has also taught Java programming at UC Berkeley Extension. He is the author of Practical Common LISP from Apress.