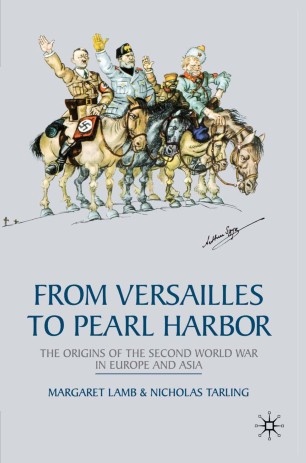 From Versailles to Pearl Harbor

The Origins of the Second World War in Europe and Asia

In 1941, the European war became a world war. This book tackles that process in its economic, political and ideological dimensions. Margaret Lamb and Nicholas Tarling explore the significance of the Asian factor and the importance of East Asia in the making of the war in Europe and the transformation of the European war of 1939 into the world war of 1941. This Asian factor has often been neglected, but the policies of all the major powers were affected by their world-wide interests. France had its possessions in North Africa and Asia; Nazi Germany chose to become involved in China and to make an agreement with Japan; Britain's action in Europe and the Mediterranean were conditioned by its commitments elsewhere in the world, and the United States and the Soviet Union were both involved in Europe and Asia. In particular the threat that Japan presented to the status quo in East Asia made it difficult for the war in Europe in turn affected the position in East Asia. The US built a two-ocean navy and encouraged the British to continue their struggle by keeping the resources of South East Asia available, and these steps led to a clash with the Japanese.

MARGARET LAMB was, before her retirement, Senior Lecturer of History at the University of Auckland, New Zealand.

NICHOLAS TARLING is Emeritus Professor of History at the New Zealand Asia Institute at the University of Auckland.