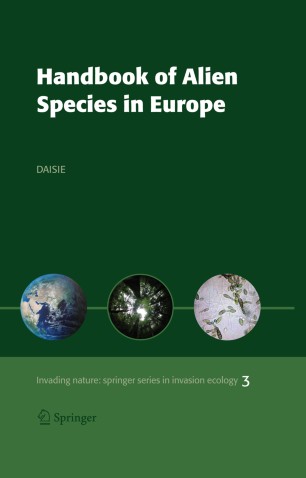 Handbook of Alien Species in Europe

Biological invasions by alien (non-native) species are widely recognized as a significant component of human-caused global environmental change and the second most important cause of biodiversity decline. Alien species threaten many European ecosystems and have serious environmental, economic and health impacts. The DAISIE (Delivering Alien Invasive Species Inventories for Europe) project has now brought together all available information on alien species in Europe (terrestrial, aquatic and marine) and from all taxa (fungi, plants, animals). Thus for the first time, an overview and assessment of biological invasions in the Pan-European region is finally possible.

The Handbook of Alien Species in Europe summarises the major findings of this groundbreaking research and addresses the invasion trends, pathways, and both economic as well as ecological impact for eight major taxonomic groups. Approximately 11.000 alien species recorded in Europe are listed, and fact sheets for 100 of the most invasive alien species are included, each with a distribution map and colour illustration.

The book is complemented by a regularly updated internet database providing free additional information. With its highly interdisciplinary approach, DAISIE and its Handbook will be the basis for future scientific investigations as well as management and control of alien invasive species in Europe.

DAISIE is an acronym for Delivering Alien Invasive Species Inventories for Europe. This was the title of an EU project in the 6th FP (2005-2008). DAISIE represents the consortium of 83 partners and 99 collaborators and their joint effort. All European states are represented in this consortium.

“Chapters cover the animal and plant groups in detail: alien fungi, bryophytes and lichens, vascular plants, terrestrial invertebrates, invertebrates and fish in inland waters, marine biota, birds, amphibians and reptiles, and, finally, mammals. … All in all, the ‘Handbook of Alien Species in Europe’ is a valuable source of information for the general ecologist, particularly as a companion book for the diverse literature on biological invasions, and for the practitioner being interested in the management of invasive species in Europe.” (Matthias Schaefer, Basic and Applied Ecology, Vol. 12 (6), 2011)
Buy options