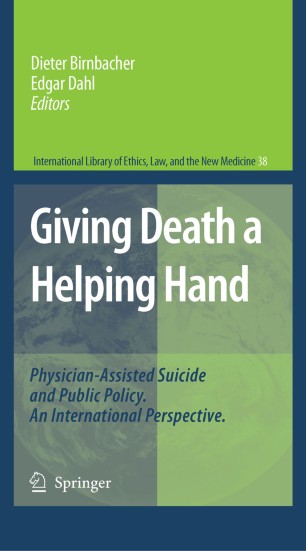 Part of the International Library of Ethics, Law, and the New Medicine book series (LIME, volume 38)

If it comes to choosing between methods of last resort for severely suffering, physician-assisted suicide will probably prove more acceptable as a method of last resort than active euthanasia both to patients, to legislators and to the general public. From the perspective of patients, physician-assisted suicide is a more unambiguous expression of the patient's autonomous will. From the legislator's perspective it seems less liable to misuse and abuse. And often the availability of assisted suicide, instead of shortening the life of a patient, has proved to prolong it. Public policy has begun to respond to this prospect. Notably in Switzerland and Germany, the attitudes of public bodies towards physician-assisted suicide are in a process of change, partly motivated by the wish to take the edge off the pressure for legalisation of active euthanasia.

The present volume focuses on public policy issues related to physician-assisted suicide. It offers a detailed analysis of the current legal standing and practice of physician-assisted suicide in various countries and discusses the ethical principles underlying its legal and professional regulation. In addition, it contains a number of personal narratives by professionals who have for many years been involved in end-of-life issues.