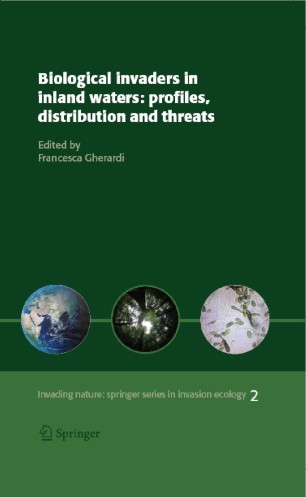 As predicted by Charles Elton in 1958, today invasive species have come to dominate 3% of the Earth’s ice-free surface, constituting one of the most serious ecological and economic threats of the new millennium. In spite of any prevention effort, the number of invasive species is expected to increase in the next years as an inevitable consequence of both the augmented complexity of international trade and the deregulation of national and international markets. New pathways have been opened and the movement of non-indigenous species along them has been facilitated.

Since the 1980s, studies of non-indigenous species have expanded greatly as a reflection of the rise in popularity that the discipline of invasion biology has gained among ecologists. However, the number of published articles is biased towards terrestrial invaders; invasive events occurring in freshwater systems have been most often neglected or analyzed only in a few regional contexts or for a small number of paradigmatic species. Yet freshwater systems, whose value to humankind is obviously priceless, are particularly vulnerable to non-indigenous species as a direct consequence of the intensity with which humans utilize fresh waters for recreation, food sources, and commerce.

The book examines the identity, distribution, and impact of freshwater non-indigenous species and the dynamics of their invasion. Rather than providing a broad and comprehensive review of the issue, Biological invaders in inland waters focuses on old and new invaders and also raises questions and opens perspectives that provide a starting point for further research. The ultimate purpose of this book is to help define a more general framework for our knowledge of invasions in fresh waters. Such a framework will be indispensable to the planning of a science-based management program.

"This second volume … focuses on non-indigenous freshwater species. The book includes 39 chapters … by 82 contributors from 18 countries. … I do like the book and can recommend it. It is well written throughout … . References are provided separately for each chapter … which is very useful when photocopying a chapter. The book’s index is very useful, too … . In sum, the book … will have a very interesting read." (Jonathan M. Jeschke, Basic and Applied Ecology, Vol. (10), 2009)