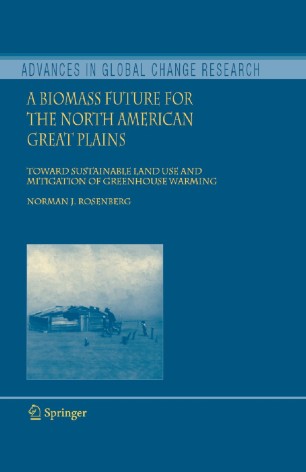 A Biomass Future for the North American Great Plains

Toward Sustainable Land Use and Mitigation of Greenhouse Warming

The Great Plains of North America is a major global breadbasket but its agriculture is stressed by drought, heat spells, damaging winds, soil erosion and declining ground water resources. The great inter-annual variability in crop production and declining rural populations weaken an economy already highly dependent upon government support. The region’s ecological fragility and economic weakness is attributed by many to removal of its original grass cover. Abandonment of agricultural cropping and restoration of the grass cover is one proposed solution to the region’s problems.

Simulation models suggest that the agriculture and water resources of the Plains may be stressed even further as its climate changes because of global warming, which is due primarily to the emissions of greenhouse gases from fossil fuel combustion. This book explores the possibility that the ecology and economy of the Plains region (and similar regions) would benefit from the introduction of perennial biomass crops. Biomass production and processing on the Plains (possibly aided by genetic engineering) would partially restore a perennial vegetative cover and create new employment opportunities. Biomass also offers a means of reducing fossil fuel use, providing fuel to local power plants and a feedstock for production of cellulosic ethanol, a gasoline substitute. Interest in biofuels is growing rapidly in public, political and business circles with rising fossil fuel prices and because of a growing recognition of the need for energy independence in petroleum importing countries.