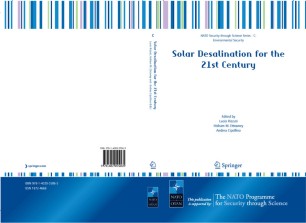 Solar Desalination for the 21st Century

Part of the NATO Security through Science Series book series

st The solar desalination workshop for the 21 century was sponsored by NATO program Security Through Science. In a great number of countries water scarcity, coupled with a significant growth in population especially in developing countries, poses the serious problem of supplying fresh water. The countries affected by water scarcity are found in the African, Asian, European and American continents, and also are on the southern and eastern coasts of the Mediterranean Sea. Severe drought usually generates a general malaise in populations which are already affected by a number of social and poverty problems, which often lead to significant and uncontrolled emigration towards richer countries, especially if one takes into account the increasing economic and lifestyle gap between north and south Mediterranean countries. Emigration could be contained if basic life needs were guaranteed to the population in their homelands, particularly potable water supply. Abundant solar energy combined with desalination could provide a sustainable source of potable water, but unfortunately, the optimum configuration for solar desalination that would provide inexpensive fresh water is difficult to reach. Further exhaustive research, field developments, and proper mobilization and coordination of funding, research and development is needed to achieve this goal.