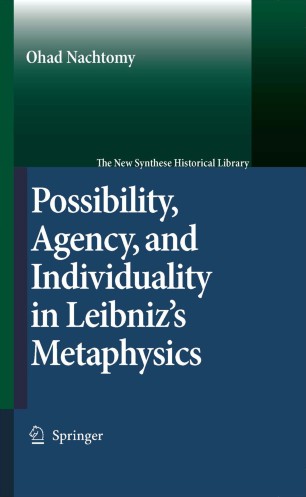 This work presents Leibniz’s subtle approach to possibility and explores some of its consequential repercussions in his metaphysics. Ohad Nachtomy presents Leibniz’s approach to possibility by exposing his early suppositions, arguing that he held a combinatorial conception of possibility. He considers the transition from possibility to actuality through the notion of agency; the role divine agency plays in actualization; moral agency and human freedom of action and the relation between agency and necessity in comparison to Spinoza. Nachtomy analyzes Leibniz’s notion of nested, organic individuals and their peculiar unity, in distinction from his notion of aggregates.

Nachtomy suggests that Leibniz defined possible individuals through combinatorial rules that generate unique and maximally consistent structures of predicates in God’s understanding and that such rules may be viewed as programs for action. He uses this definition to clarify Leibniz’s notions of individuation, relations and his distinction between individual substances and aggregates as well as the notion of organic individuals, which have a nested structure to infinity. Nachtomy concludes that Leibniz’s definition of a possible individual as a program of action helps clarifying the unity and simplicity of nested individuals. The book thus reveals a thread that runs through Leibniz’s metaphysics: from his logical notion of possible individuals to his notion of actual, nested ones.