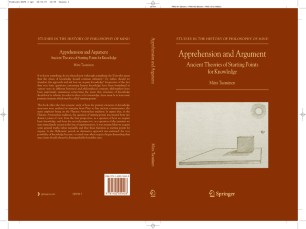 Part of the Studies in the History of Philosophy of Mind book series (SHPM, volume 3)

If we know something, do we always know it through something else? Does this mean that the chain of knowledge should continue infinitely? Or, rather, should we abandon this approach and ask how we acquire knowledge? Irrespective of the fact that very basic questions concerning human knowledge have been formulated in various ways in different historical and philosophical contexts, philosophers have been surprisingly unanimous concerning the point that structures of knowledge should not be infinite. In order for there to be knowledge, there must be at least some primary elements which may be called ‘starting points’.

This book offers the first synoptic study of how the primary elements in knowledge structures were analysed in antiquity from Plato to late ancient commentaries, the main emphasis being on the Platonic-Aristotelian tradition. It argues that, in the Platonic-Aristotelian tradition, the question of starting points was treated from two distinct points of view: from the first perspective, as a question of how we acquire basic knowledge; and from the second perspective, as a question of the premises we may immediately accept in the line of argumentation. It was assumed that we acquire some general truths rather naturally and that these function as starting points for inquiry. In the Hellenistic period, an alternative approach was endorsed: the very possibility of knowledge became a central issue when sceptics began demanding that true claims should always be distinguishable from false ones.

"[...] provides some extraordinary insights into classical philosophy, insights that may prove to be useful to scholars who are willing to put the effort into pursuing them. [...] a valuable book for scholars of argument and rhetoric who are motivated enough to cross disciplinary lines." (David Hoffman, CUNY Baruch College, in Argumentation and Advocacy 47:1, 2010)
Buy options