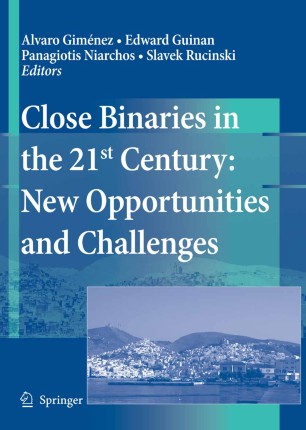 Close Binaries in the 21st Century: New Opportunities and Challenges

An International Conference entitled "Close Binaries in the 21st Century: New Opportunities and Challenges", was held in Syros island, Greece, from 27 to 30 June, 2005.

There are many binary star systems whose components are so close together, that they interact in various ways. Stars in such systems do not pass through all stages of their evolution independently of each other; in fact their evolutionary path is significantly affected by their companions. Processes of interaction include gravitational effects, mutual irradiation, mass exchange, mass loss from the system, phenomena of extended atmospheres, semi-transparent atmospheric clouds, variable thickness disks and gas streams.

The zoo of Close Binary Systems includes: Close Eclipsing Binaries (Detached, Semi-detached, Contact), High and Low-Mass X-ray Binaries, Cataclysmic Variables, RS CVn systems, Pulsar Binaries and Symbiotic Stars. The study of these binaries triggered the development of new branches of astrophysics dealing with the structure and evolution of close binaries and the interaction effects displayed by these exciting objects. Close Binaries are classic examples of the fundamental contribution that stellar astrophysics makes to our general understanding of physical processes in the universe.

Ground-based and space surveys will discover many new close binaries, which were previously unknown. In the future, new approaches will also be possible with highly efficient photometric searches looking for very shallow eclipses, such as those produced by Earth-like extra-solar planets.

Contributions to this conference covered the latest achievements in the field and reflected the state of the art of the dynamically evolving area of binary star research.