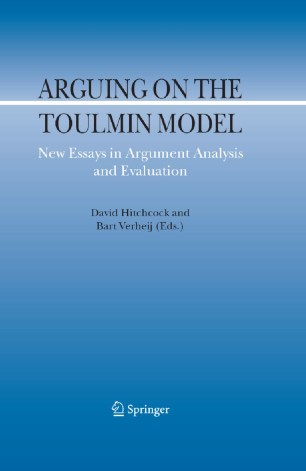 Arguing on the Toulmin Model

In The Uses of Argument, first published in 1958, Stephen Toulmin proposed a new model for the layout of arguments, with six components: claim, data, warrant, qualifier, rebuttal, backing. Toulmin’s model has been appropriated, adapted and extended by researchers in the fields of speech communications, philosophy and artificial intelligence. The present volume aims to bring together the best contemporary reflection in these fields on the Toulmin model and its current appropriation. The volume includes 24 articles by 27 scholars from 10 countries. All the essays are newly written, have been selected from among those received in response to a call for papers, and have been revised extensively in response to referees’ comments. They are not exegetical but substantive, extending or challenging Toulmin’s ideas in ways that make fresh contributions to the theory of analysing and evaluating arguments. Collectively, they represent the only comprehensive book-length study of the Toulmin model. They point the way to new developments in the theory of argument, including a typology of warrants, a comprehensive theory of defeaters, a rapprochement with formal logic, and a turn from propositions to speech acts as the constituents of argument.