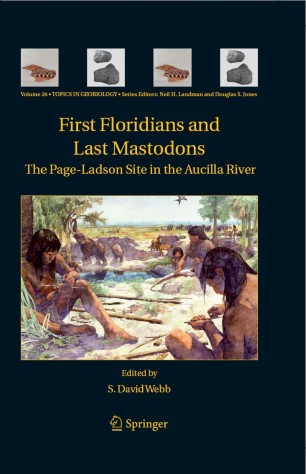 First Floridians and Last Mastodons: The Page-Ladson Site in the Aucilla River

Over the last 20 years the Aucilla River Prehistory Project has been one of the most f- cinating stories unfolding in Florida. This project, uncovering the remains of plants and animals from the end of the last Ice Age and the beginning of Florida’s human oc- pation, is answering questions important to the entire western hemisphere. Questions such as when did people first arrive in the Americas? Were these newcomer scavengers or skillful hunters? Could they have contributed to the extinction of the great Ice Age beasts – animals such as elephants – that were creatures native to Florida for the pre- ous million or so years? And how did these first Florida people survive 12,000 years ago at a time when sea level was so low that this peninsula was double its present size, sprawling hugely into the warm waters of the Caribbean? Much of Florida at that time was almost desert. Fresh water – for both man and beast – was hard to find. The lower reaches of today’s Aucilla River are spellbinding. Under canopies of oak and cypress, the tea-colored water moves slowly toward the Gulf of Mexico, sometimes sinking out of sight into ancient drowned caves and then welling up again a few feet or a few miles downstream. Along the river bottom, the remains of long extinct animals and Florida’s earliest people lie entombed in orderly layers of peat, sand, and clay.