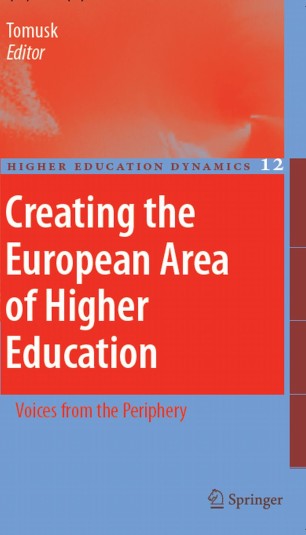 Voices from the Periphery

Since 1999 European higher education has been engaged in the most radical reform seen during its 900 years of history. Out of the widely diverse national higher education systems and sub-systems a common European Higher Education Area is being created. This process, driven by the great ideas of establishing federal Europe, is full of tensions and conflicts often ignored in the official discourse. Expanding the project well beyond the borders of the European Union created the difficulty that relatively prosperous and high quality universities in the Western part find themselves side-by-side with much poorer universities of sometimes questionable quality in other parts of the continent.  This has led to the rise of many controversial issues, as some of the sponsors of the Process, particularly the European Commission, see international competitiveness of European universities as its most significant goal. The Process is being perceived as following the logic of re-design of European knowledge products for the purposes of the world markets and certain elements of the production process. University communities - academic staff and students - however, sometimes feel that such an approach may not only carry the threat of compromising their vital interests but also call for the revision of the principles of academic autonomy as understood in Europe since the early 19th century.

This volume brings together a group of higher education researchers across Europe and looks into the implementation of the Bologna Process in the countries often attributed a peripheral status. Although it is also obvious that if the Process has a center, it stands external to higher education systems and universities it concerns. One can possibly find it either in Brussels or across the Atlantic in the United States, internationally perceived as the main competitor to European higher education. In addition to cultural and political issues the European higher education project faces in various countries, the volume pays particular attention to the role of students as well as the changing position of the intellectuals under its impact.

'This is an important book on a central topic at an important time. It is learned in the best sense, eminently readable and that across many different levels. It is also caustic, deeply ironic and passionate and because passionate, unswervingly provocative.'