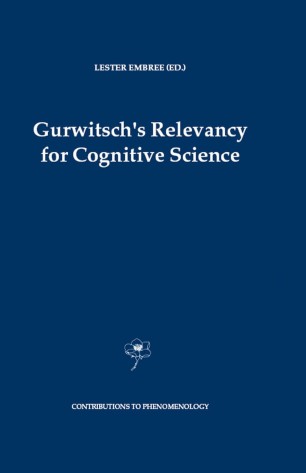 Part of the Contributions to Phenomenology book series (CTPH, volume 52)

When I heard the rumor that the findings about the central nervous system obtained with new technology, such as Magnetic Resonance Imaging (MRI) and Positron Emission Tomography (PET), were too subtle to correlate with the crude results of many decades of behavioristic psychology, and that some psychologists were now turning to descriptions of subjective phenomena in William James, Edmund Husserl, and Maurice Merleau-Ponty—and even in Buddhism—I asked myself, “Why not Aron Gurwitsch as well?” After all, my teacher regularly reflected on the types, basic concepts, and methods of psychology, worked with Adhémar Gelb and Kurt Goldstein in the institute investigating brain-injured veterans at Frankfurt in the 1920s, conspicuously employed Gestalt theory to revise central Husserlian doctrines, and taught Merleau-Ponty a thing or two. That the last book from his Nachlass had recently been published and that I had recently written an essay on his theory of 1 psychology no doubt helped crystallize this project for me. What is “cognitive science”? At one point in assembling this volume I polled the participants, asking whether they preferred “the cognitive sciences” or “cognitive science. ” Most who answered preferred the latter expression. There is still some vagueness here for me, but I do suspect that cognitive science is 2 another example of what I call a “multidiscipline. ” A multidiscipline includes participants who confront a set of issues that is best approached under more than one disciplinary perspective.