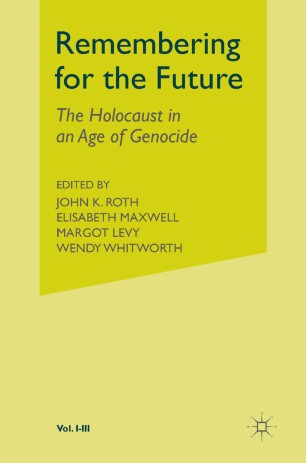 Remembering for the Future

The Holocaust in an Age of Genocide

Focused on 'The Holocaust in an Age of Genocide', Remembering for the Future brings together the work of nearly 200 scholars from more than 30 countries and features cutting-edge scholarship across a range of disciplines, amounting to the most extensive and powerful reassessment of the Holocaust ever undertaken. In addition to its international scope, the project emphasizes that varied disciplinary perspectives are needed to analyze and to check the genocidal forces that have made the Twentieth century so deadly. Historians and ethicists, psychologists and literary scholars, political scientists and theologians, sociologists and philosophers - all of these, and more, bring their expertise to bear on the Holocaust and genocide. Their contributions show the new discoveries that are being made and the distinctive approaches that are being developed in the study of genocide, focusing both on archival and oral evidence, and on the religious and cultural representation of the Holocaust.