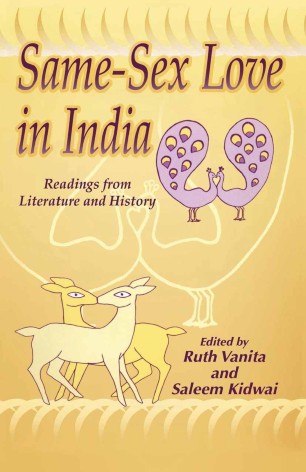 Readings from Literature and History

Lambda literary award finalist, Same-Sex Love in India presents a stunning array of writings on same-sex love from over 2000 years of Indian literature. Translated from more than a dozen languages and drawn from Hindu, Buddhist, Muslim, and modern fictional traditions, these writings testify to the presence of same-sex love in various forms since ancient times, without overt persecution. This collection defies both stereotypes of Indian culture and Foucault's definition of homosexuality as a 19th-century invention, uncovering instead complex discourses of Indian homosexuality, rich metaphorical traditions to represent it, and the use of names and terms as early as medieval times to distinguish same-sex from cross-sex love. An eminent group of scholars have translated these writings for the first time or have re-translated well-known texts to correctly make evident previously underplayed homoerotic content. Selections range from religious books, legal and erotic treatises, story cycles, medieval histories and biographies, modern novels, short stories, letters, memoirs, plays and poems. From the Rigveda to Vikram Seth, this anthology will become a staple in courses on gender and queer studies, Asian studies, and world literature.

Ruth Vanita is Associate Professor of Women’s Studies at the University of Montana.

Saleem Kidwai is a translator, writer, and consultant living in New Delhi.