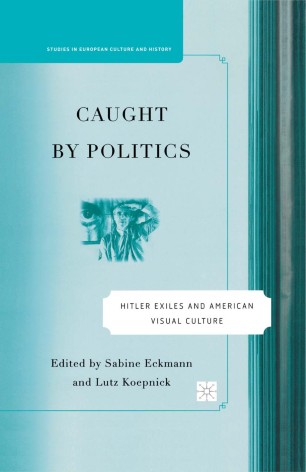 This book explores German and European exile visual artists, designers and film practitioners in the United States such as Max Beckmann, George Grosz, Hans Richter, Peter Lorre, and Edgar Ulmer and examines how American artists including Walter Quirt, Jackson Pollock, and Robert Motherwell responded to the Europeanization of American culture.

SABINE ECKMANN is the director of the Mildred Lane Kemper Art Museum at Washington University in St. Louis, USA.

'Eckmann and Koepnick's anthology Caught by Politics is an innovative cross- cultural examination of the multiple paths of European exiles to the United States that offers new readings about the nature of modernism. By bringing together art history, architectural history, film and media studies the book seeks to complicate Adorno's familiar perspective of exile as an experience of loss, mourning, and rupture, and proposes instead that the exile's life in America provided the opportunity for new and creative ways to engage with modernist art and culture. Essays on Beckmann, Grosz, the Surrealists in the U.S and the reception of refugee artists reveal exilic art, architecture and film as a hybrid of multiple cultural influences and political agendas. The inclusion of provocative essays on architects Peter and Schneider, the horror films of Edgar Ulmer, and the career of actor Peter Lorre enrich this comparative study of what traditionally is divided as high and low. This book is an essential reading for any student of exile, modernism, and those interested in the complexity and nuances that complicate the canon.' - Stephanie Barron, Senior Curator of the Los Angels County Museum of Art and curator of Degenerate Art: The Fate of the Avant-Garde in Nazi Germany and Exiles and Emigres: The Flight of European Artists from Hitler