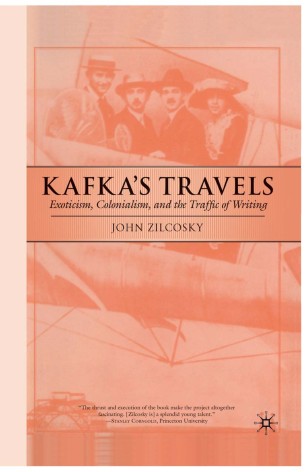 Exoticism, Colonialism, and the Traffic of Writing

In 1916, Kafka writes of The Sugar Baron , a dime-store colonial adventure novel, '[it] affects me so deeply that I feel it is about myself, or as if it were the book of rules for my life.' John Zilcosky reveals that this perhaps surprising statement - made by the Prague-bound poet of modern isolation - is part of a network of remarks that exemplify Kafka's ongoing preoccupation with popular travel writing, exoticism, and colonial fantasy. Taking this biographical peculiarity as a starting point, Kafka's Travels elegantly re-reads Kafka's major works ( Amerika , The Trial , The Castle ) through the lens of fin-de siecle travel culture. Making use of previously unexplored literary and cultural materials - travel diaries, train schedules, tour guides, adventure novels - Zilcosky argues that Kafka's uniquely modern metaphorics of alienation emerges out of the author's complex encounter with the utopian travel discourses of his day.

'[T]here is much to be said for [Zilcosky's] new, postcolonial Kafka.' - Times Literary Supplement