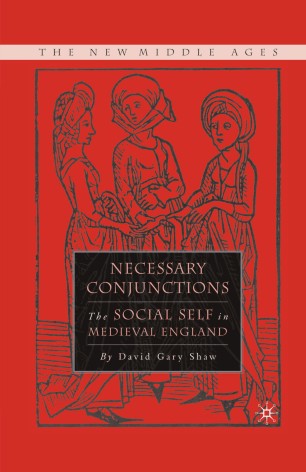 Necessary Conjunctions is an original study of how regular medieval people created their public social identities. Focusing especially on the world of English townspeople in the later Middle Ages, the book explores the social self, the public face of the individual. It gives special attention to how prevalent norms of honor, fidelity and hierarchy guided and were manipulated by medieval citizens. With variable success, medieval men and women defined themselves and each other by the clothes they work, the goods they cherished, as well as by their alliances and enemies, their sharp tongues and petty violence. Employing a highly interdisciplinary methodology and an original theory makes it possible to see how personal agency and identity developed within the framework of later medieval power structures.

"David Gary Shaw's Necessary Conjunctions offers a subtle, penetrating and persuasive analysis of the concept of the 'social self' as it was realized in the world of late medieval urban society in England. The book powerfully articulates a notion of 'social agency' and how it can be understood in the social worlds of the past, avoiding some of the pitfalls of current discussions of self and the individual in the Middle Ages. Shaw has developed a graceful way of talking about social history that keeps meaning in the forefront, a style always sensitive to the theoretical implications of his findings, without privileging theory as such. At the same time, he is equally successful in conveying historical actualities, providing the reader with textured sense of lives lived within constraints, but also possibilities, that surely was the condition under which individual agency operated in this world. Necessary Conjunctions holds wide interest for historians interested in both social history and theories of self and agency in the Middle Ages and beyond." - Gabrielle Spiegel, Dean of Humanities, College of Letters and Science, University of California, Los Angeles

"Medieval people, more than those of any other European era, are not recognized in terms of the self, individuality, agency and choice. The deeply nuanced and utterly persuasive achievement of Shaw s book is to give us a portrait of medieval people - ordinary people, unheroic small town, small society people - with their full and complex interiority at last restored. He does this, with a quiet and systematic audacity, by taking seriously the long-established but under-scrutinized assumptions about the social and collective identities of medieval people and working out precisely how these people emerged as full persons through and against the pressures of face-to-face social life. Fascinatingly written in a fresh and feeling prose (which itself marks a new tonality of the historian s voice) Shaw lets us accompany medieval townspeople in the small, fraught encounters with one another that expressed desire, ambition, and selfhood within the almost-flexible boundaries of their society. " - Nancy Partner, McGill University