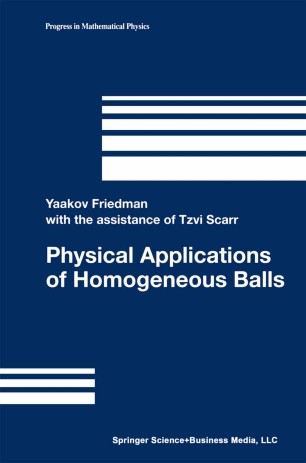 One of the mathematical challenges of modern physics lies in the development of new tools to efficiently describe different branches of physics within one mathematical framework. This text introduces precisely such a broad mathematical model, one that gives a clear geometric expression of the symmetry of physical laws and is entirely determined by that symmetry.

The first three chapters discuss the occurrence of bounded symmetric domains (BSDs) or homogeneous balls and their algebraic structure in physics. It is shown that the set of all possible velocities is a BSD with respect to the projective group; the Lie algebra of this group, expressed as a triple product, defines relativistic dynamics. The particular BSD known as the spin factor is exhibited in two ways: first, as a triple representation of the Canonical Anticommutation Relations, and second, as a ball of symmetric velocities. The associated group is the conformal group, and the triple product on this domain gives a representation of the geometric product defined in Clifford algebras. It is explained why the state space of a two-state quantum mechanical system is the dual space of a spin factor. Ideas from Transmission Line Theory are used to derive the explicit form of the operator Mobius transformations. The book further provides a discussion of how to obtain a triple algebraic structure associated to an arbitrary BSD; the relation between the geometry of the domain and the algebraic structure is explored as well. The last chapter contains a classification of BSDs revealing the connection between the classical and the exceptional domains.

With its unifying approach to mathematics and physics, this work will be useful for researchers and graduate students interested in the many physical applications of bounded symmetric domains. It will also benefit a wider audience of mathematicians, physicists, and graduate students working in relativity, geometry, and Lie theory.

"The aim of this book is to present the theory of Jordan algebraic structures (Jordan triple systems) and their geometric counterpart, the so-called homogeneous balls, from the point of view of applications ot mathematical physics: special relativity, spinors and foundational quantum mechanics...The (senior) author has made important research contributions to all three areas described above, and the exposition of the theory and the applications is very careful. This makes the book suitable both for experts and non-experts interested in the applications." ---Mathematical Reviews

“This fine book provides a highly original approach to theoretical physics, its contents reflecting the author’s and his ollaborators’ copious contributions to many branches of mathematics and physics over the past years.”(ZENTRALBLATT MATH)