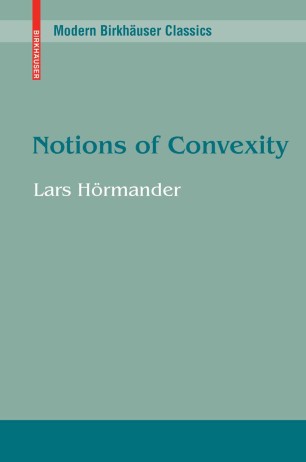 The first two chapters of this book are devoted to convexity in the classical sense, for functions of one and several real variables respectively. This gives a background for the study in the following chapters of related notions which occur in the theory of linear partial differential equations and complex analysis such as (pluri-)subharmonic functions, pseudoconvex sets, and sets which are convex for supports or singular supports with respect to a differential operator. In addition, the convexity conditions which are relevant for local or global existence of holomorphic differential equations are discussed, leading up to Trépreau’s theorem on sufficiency of condition (capital Greek letter Psi) for microlocal solvability in the analytic category.

At the beginning of the book, no prerequisites are assumed beyond calculus and linear algebra. Later on, basic facts from distribution theory and functional analysis are needed. In a few places, a more extensive background in differential geometry or pseudodifferential calculus is required, but these sections can be bypassed with no loss of continuity. The major part of the book should therefore be accessible to graduate students so that it can serve as an introduction to complex analysis in one and several variables. The last sections, however, are written mainly for readers familiar with microlocal analysis.