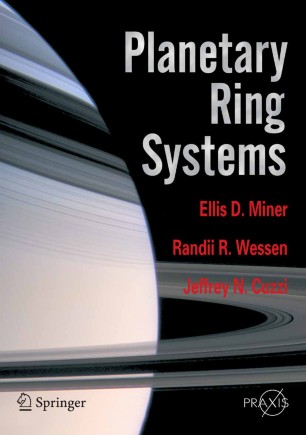 Miner and Wessen have teamed together again, along with noted planetary ring scientist, Dr Jeffrey Cuzzi, to produce the most comprehensive and up-to date book on the topic of planetary rings systems yet written. The book is written in a style and at a language level easily accessible to the interested non-expert. The authors cover the scientific significance of ring studies, the history of their discovery and characterization, the observations of Pioneer 10 at Jupiter, Pioneer 11 and Voyager 1 at Jupiter and Saturn, Voyager 2 at all four giant planets of the solar system, and Galileo at Jupiter. The discussion also includes subsequent scientific analyses of the observations, along with the accompanying theoretical studies, including various theories for the origins of planetary ring systems. Finally, the four ring systems are both compared and contrasted in a chapter on comparative planetology.

Early additional findings from the Cassini spacecraft in orbit around Saturn (due to arrive in July 2004) will also be included. The first series of ring orbits by Cassini occur between May and October 2005 and this book will provide the first summary of these detailed observations, the first since the flyby of Voyager 2 in 1981. Images of Saturn, as the Cassini spacecraft approached the planet in spring 2004, revealed a wealth of detail in the ring system, a foretaste of the excitement to come.

Each chapter includes extensive notes, references, figures and tables. A bibliography is also included at the end of each chapter, for those who want to peruse the existing literature. Both a glossary and a topical index will make the book a useful reference tool for planetary scientists as well as for the targeted audience of non-experts.