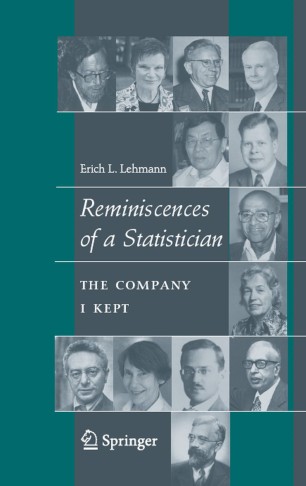 Reminiscences of a Statistician

The Company I Kept

This relatively nontechnical book is the first account of the history of statistics from the Fisher revolution to the computer revolution.  It sketches the careers, and highlights of some of the work, of 65 people, most of them statisticians.  What gives the book its special character is its emphasis on the author's interaction with these people and the inclusion of many personal anecdotes.
Combined, these portraits provide a panoramic view of statistics during the period in question. Included are discussions of such topics as nonparametrics, Bayesian approaches, and data analysis. The stress is on ideas and technical material is held to a minimum. Thus the book is accessible to anyone with at least an elementary background in statistics.
Erich L. Lehmann is Professor Emeritus of Statistics at the University of California at Berkeley. He is a member of the American and National Academies, a former Editor of the Annals of Mathematical Statistics, and former President of the Institute of Mathematical Statistics. He holds honorary degrees from the University of Chicago and  University of Leiden, and was awarded the Wilks and Noether prizes. He is also the author of Testing Statistical Hypotheses, Theory of Point Estimation, and Elements of Large-Sample Theory, all published by Springer. Two more elementary books, Basic Concepts of Probability and Statistics (joint with Hodges) and Nonparametrics have recently been reissued by SIAM and Springer, respectively.