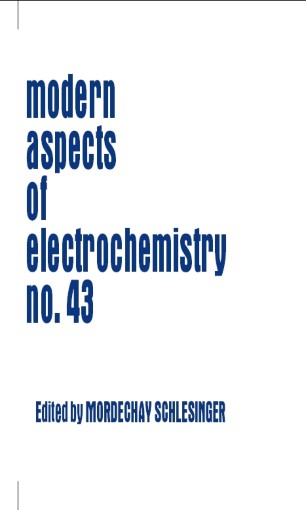 This volume contains eight chapters dealing with modeling and numeric simulations. Topics in Number 43 include:

From reviews of previous volumes:

"This long-standing series continues its tradition of offering high quality reviews of established and emerging subject areas, together with the less common aspects of electrochemical science … Deserves a place in electrochemistry libraries and should prove useful to electrochemists and related workers."

"Continues the valuable service that has been rendered by the Modern Aspects series."

"Will definitely be of much use to researchers in the field of electrochemistry… The editors of this well-produced volume deserve all appreciation for maintaining the excellent standard of the series."

"Extremely well-referenced and very readable … Maintains the overall high standards of the series."

- Journal of the American Chemical Society

“The present book is devoted to numerical simulation and modeling within the large field of electrochemistry. It is divided in eight chapters. … In conclusion it can be stated that the present book is surely worth of being incorporated in the library of scientists and engineers, working in the field of modeling electrochemical processes and systems.” (T. Eichler, Materials and Corrosion, Vol. 62 (3), 2011)
Buy options