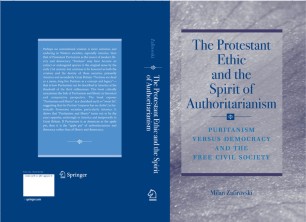 The Protestant Ethic and the Spirit of Authoritarianism

Perhaps no conventional wisdom is more common and enduring in Western societies, especially America, than that of Protestant Puritanism as the source of modern liberty and democracy. "Puritans" may have become an extinct or endangered species in the original sense by the early 21st century, but continue to be honored as both the creators and the destiny of these societies, primarily America and secondarily Great Britain. "Puritans are dead as a name, long live Puritans as a concept and legacy"--that is how Puritanism can be described in America at the threshold of the third millennium. This book critically reexamines the link of Puritanism and liberty in historical and comparative perspective. The book exposes "Puritanism and liberty" as a cherished myth or "sweet lie", suggesting that the Puritan "emperor has no cloths", in historically Protestant societies, particularly America. It shows that "Puritanism and liberty" turns out to be the exact opposite, enduringly in America and temporarily in Great Britain. If Puritanism is as American as the apple pie, then it is the "apple pie" of authoritarianism and theocracy rather than of liberty and democracy.

Milan Zafirovski is associate professor in the Department of Sociology at the University of North Texas, USA. He holds doctoral degrees in economics and sociology. His research interests are interdisciplinary focusing on the relations between economy, politics and society. He is the author of three books: Market and Society (2003): The Duality of Structure in Markets (2002), and Exchange, Action and Social Structure (2001), as well as more than 50 articles in refereed economics and sociology journals in America, Europe and elsewhere. He is also a co-editor of the International Encyclopedia of Economic Sociology (2006) as well as an advisory/area editor in the area of Economic Sociology for the Encyclopedia of Sociology (edited by George Ritzer) (forthcoming).