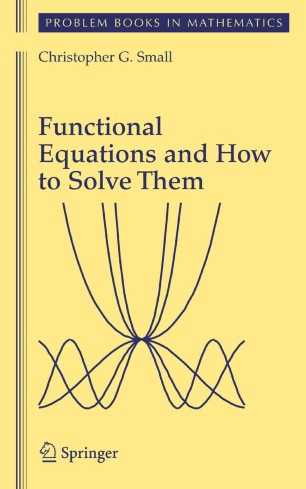 Functional Equations and How to Solve Them

The book also provides a number of brief biographical sketches of some of the mathematicians who pioneered the theory of functional equations. The work of Oresme, Cauchy, Babbage, and others, is explained within the context of the mathematical problems of interest at the time.

Christopher Small is a Professor in the Department of Statistics and Actuarial Science at the University of Waterloo. He has served as the co-coach on the Canadian team at the IMO (1997, 1998, 2000, 2001, and 2004), as well as the Waterloo Putnam team for the William Lowell Putnam Competition (1986-2004). His previous books include Numerical Methods for Nonlinear Estimating Equations (Oxford 2003), The Statistical Theory of Shape (Springer 1996), Hilbert Space Methods in Probability and Statistical Inference (Wiley 1994).

Functional Equations and How to Solve Them fills a need and is a valuable contribution to the literature of problem solving.

The main purpose and merits of the book...are the many solved, unsolved, partially solved problems and hints about several particular functional equations.

"This book is devoted to functional equations of a special type, namely to those appearing in competitions … . The book contains many solved examples and problems at the end of each chapter. … The book has 130 pages, 5 chapters and an appendix, a Hints/Solutions section, a short bibliography and an index. … The book will be valuable for instructors working with young gifted students in problem solving seminars." (EMS Newsletter, June, 2008)