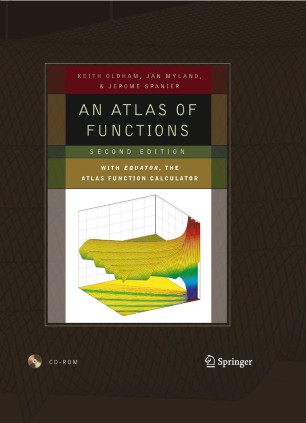 An Atlas of Functions

with Equator, the Atlas Function Calculator

This second edition of An Atlas of Functions, with Equator, the Atlas Function Calculator, provides comprehensive information on several hundred functions or function families of interest to scientists, engineers and mathematicians who are concerned with the quantitative aspects of their field. Beginning with simple integer-valued functions, the book progresses to polynomials, exponential, trigonometric, Bessel, and hypergeometric functions, and many more. The 65 chapters are arranged roughly in order of increasing complexity, mathematical sophistication being kept to a minimum while stressing utility throughout. In addition to providing definitions and simple properties for every function, each chapter catalogs more complex interrelationships as well as the derivatives, integrals, Laplace transforms and other characteristics of the function. Numerous color figures in two- or three- dimensions depict their shape and qualitative features and flesh out the reader’s familiarity with the functions. In many instances, the chapter concludes with a concise exposition on a topic in applied mathematics associated with the particular function or function family.
Features that make the Atlas an invaluable reference tool, yet simple to use, include:
full coverage of those functions—elementary and "special”—that meet everyday needs
a standardized chapter format, making it easy to locate needed information on such aspects as: nomenclature, general behavior, definitions, intrarelationships, expansions, approximations, limits, and response to operations of the calculus
extensive cross-referencing and comprehensive indexing, with useful appendices
the inclusion of innovative software--Equator, the Atlas Function Calculator
the inclusion of new material dealing with interesting applications of many of the function families, building upon the favorable responses to similar material in the first edition.

Keith B. Oldham is a professor of Chemistry at Trent University in Ontario, Canada. He has co-authored several books, contributed to numerous others, and has published over 200 articles. He co-authored, with Jerome Spanier, the first edition of An Atlas of Functions.

Jan C. Myland is a Research Associate in Electrochemistry at Trent University.

Jerome Spanier is a prominent mathematics professor emeritus, currently a researcher at University of California, Irvine. He has received many prestigious honors and awards and has authored or co-authored numerous publications.

"The book is devoted to functions such as quadratic and cubic polynomials, absolute value, square roots, etc. … the Atlas comes with software for computing the functions described in the book. … the Atlas is valuable as a reference, it also contains a large amount of expository text. … The Atlas seems to have been written for the reader who is not in such a hurry and who might enjoy looking around a bit." (John Cook, The Mathematical Association of America, March, 2009)

"This is a compilation of several hundred functions that are frequently used by engineers, scientists, and mathematicians to obtain a quantitative result. … Each chapter in this handbook discusses a function or a family of related functions for a total of 65 chapters. … Each chapter contains definitions and properties for each function along with color graphs … . Engineers, scientists, and mathematicians will find this reference book to be a handy resource for many years." (Electrical Insulation Magazine, 2009)

"This book provides elementary and basic information on several hundred functions … . a combination of a book and software is useful for scientists concerned with the quantitative aspects of their field. … layout of the book is modern with very nice colorful graphs or surfaces of functions. Each chapter contains a lot of information about the functions studied in that chapter. … This book defends well its place in the mathematical literature." (Matti Vuorinen, Zentralblatt MATH, Vol. 1167, 2009)

“This is the second edition of a handbook with same title … . There are numerous other improvements throughout this new edition but the objective remains the same to provide the reader regardless of his or her discipline with a succinct compendium of information about all the common mathematical functions in use today. … The layout of the book is excellent and it is a pleasure to see the glossy paper and the very high quality graphs. The inclusion of Equator is a useful contribution.” (Mourad E. H. Ismail, Mathematical Reviews, Issue 2010 f)
Buy options