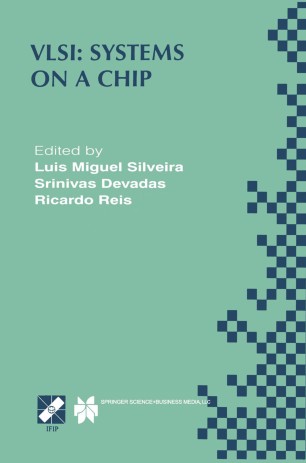 VLSI: Systems on a Chip

For over three decades now, silicon capacity has steadily been doubling every year and a half with equally staggering improvements continuously being observed in operating speeds. This increase in capacity has allowed for more complex systems to be built on a single silicon chip. Coupled with this functionality increase, speed improvements have fueled tremendous advancements in computing and have enabled new multi-media applications. Such trends, aimed at integrating higher levels of circuit functionality are tightly related to an emphasis on compactness in consumer electronic products and a widespread growth and interest in wireless communications and products. These trends are expected to persist for some time as technology and design methodologies continue to evolve and the era of Systems on a Chip has definitely come of age. While technology improvements and spiraling silicon capacity allow designers to pack more functions onto a single piece of silicon, they also highlight a pressing challenge for system designers to keep up with such amazing complexity. To handle higher operating speeds and the constraints of portability and connectivity, new circuit techniques have appeared. Intensive research and progress in EDA tools, design methodologies and techniques is required to empower designers with the ability to make efficient use of the potential offered by this increasing silicon capacity and complexity and to enable them to design, test, verify and build such systems.