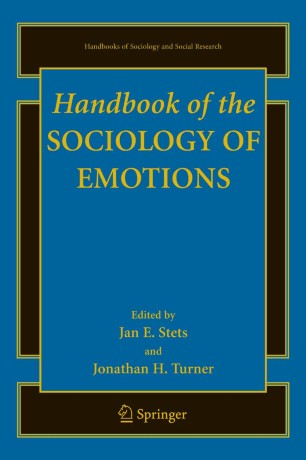 Handbook of the Sociology of Emotions

For almost thirty years, sociologists have increasingly theorized about and conducted research on human emotions. Surprisingly, it was not until the 1970s that the sociology of emotions emerged as a coherent field of inquiry. What makes this late date surprising is that it is now obvious that human behavior, interaction, and organization are driven by emotions. It was an immense oversight for emotions to be de-emphasized in sociological theorizing and research for most of its 175 year history. Since the 1970s, however, the study of emotions has accelerated and is now at the forefront of sociological analysis.

This book is designed to bring the reader up to date on the theory and research traditions that have proliferated in the analysis of human emotions. Key figures who have carried the sociology of emotions to its current level of prominence review their own work and the work of others who have made contributions to a particular approach to the study of emotions. The outcome is a comprehensive book that serves as a primer on the cutting edge of sociological work in what is obviously a key dynamic in human affairs.

The first section of the book addresses the range of emotions and how they can be classified, the neurological underpinnings of emotions, and the effect of gender on emotions. The second section reviews the prominent sociological theories of emotions, including theories emphasizing power and status, rituals, identity and self, psychoanalytic dynamics, exchange, expectation states, and evolution.While there is little integration among these theories, this state of affairs will not last forever. The third section addresses theory and research on specific emotions such as love, jealousy and envy, empathy, sympathy, anger, grief, and the moral emotions. While this list does not exhaust the range of human feeling, they are central emotions that drive human behavior, interaction, and social organization. The last section explores how the study of emotions has added new insight into other subfields within sociology such as the study of the workplace, health, and social movements. These chapters illustrate how the sociology of emotions can provide new research and theory for the large numbers of specialties within sociology.