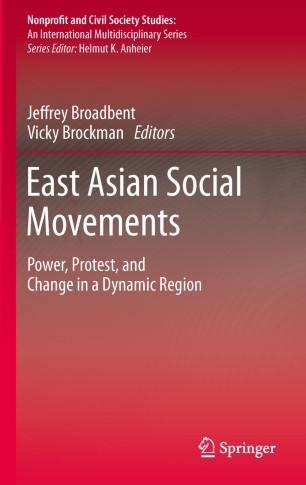 Power, Protest, and Change in a Dynamic Region

In the study of civil society and social movements,  most cases are based in Western Europe and North America.  These two areas of the world have similar histories and political ideals and structures in common which in turn, affect the structure of its civil society.  In studying civil society in Asia, a different understanding of history, politics, and society is needed.  The region’s long traditions of centralized, authoritarian states buttressed by Confucian and in some cases Communist ideologies may render this concept irrelevant.

The chapters in this international volume cover most of the areas and countries traditionally defined as belonging to East Asia: Japan, Taiwan, South Korea, Hong Kong, Singapore and China.  The case studies included in this volume confront the utility of using the Western concept of civil society, represented in its most active form – social movements – to think about East Asia popular politics. Along with providing an array of important case studies of social movements in East Asia, the introduction, chapters and conclusion in the book take up three major theoretical questions:

This book will be of interest to two major groups of readers, those who study East Asia and those who pursue social movements and civil society, as well as politics more generally.

While the study of social movements has emerged in recent years as one of the most vibrant interdisciplinary fields of study in the social sciences, its geographic coverage has been woefully skewed to western democracies.  For that reason alone this volume would be a welcome addition to the literature.  Add to that the consistently high quality of the chapters and movement scholars have all the more reason to add this first rate volume to their libraries.

Thanks again for persevering in this important project

“East Asian Social Movements is a very timely collection for scholars, researchers, and practitioners interested in, wrestling with, and working with the dynamic relationships between and among social movements, nonprofit and voluntary organizing, democratic processes, culture, and context. … The thought-provoking collection merits the attention of all studying and working in the international and interdisciplinary field of social movements and nonprofit and voluntary organizing.” (Yea-Wen Chen, Voluntas, Vol. 24, March, 2013)
Buy options