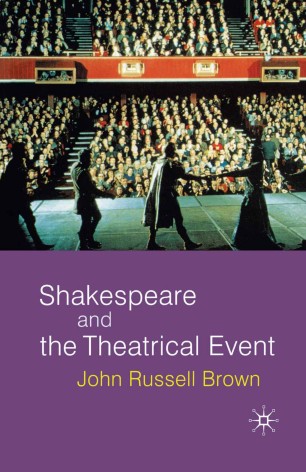 Shakespeare and the Theatrical Event

In his latest book, John Russell Brown offers a new and revealing way of reading and studying Shakespeare's plays, focusing on what a play does for an audience, as well as what its text says. By considering the entire theatrical experience and not only what happens on stage, Brown takes his readers back to the major texts with a fuller understanding of their language, and an enhanced view of a play's theatrical potential.

Chapters on theatre-going, playscripts, acting, parts to perform, interplay, stage space, off-stage space, and the use of time all bring recent developments in Theatre studies together with Shakespeare Studies. Every aspect of theatre-making comes into view as a dozen major plays are presented in the context for which they were written, making this an adventurous and eminently practical book for all students of Shakespeare.

JOHN RUSSELL BROWN is currently Professor of Theatre at Middlesex University and was recently Visiting Professor of English at Columbia University, New York. He has directed many plays for professional and student theatres in Britain, the USA, and India. From 1973 to 1988, he was an Associate Director of the National Theatre in London.