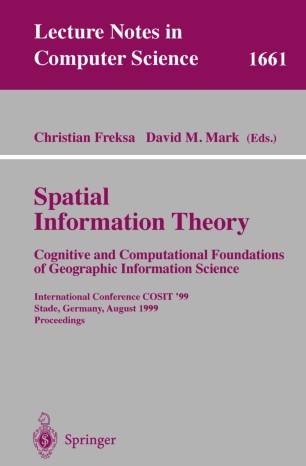 The Conference on Spatial Information Theory – COSIT – grew out of a series of workshops / NATO Advanced Study Institutes / NSF specialist meetings concerned with cognitive and applied aspects of representing large-scale space, particularly geographic space. In these meetings, the need for a well-founded theory of spatial information processing was identified. The COSIT conference series was established in 1993 as a biennial interdisciplinary European conference on the representation and processing of information about large-scale space, after a successful international conference on the topic had been organized by Andrew Frank et al. in Pisa, Italy, in 1992 (frequently referred to as ‘COSIT zero’). After two successful European conferences with strong North-American participation (COSIT ’93, held on the Island of Elba, Italy; COSIT ’95, held in Semmering, Austria), the conference became a truly international enterprise when COSIT ’97 was held in the Laurel Highlands, Pennsylvania, USA. COSIT ’99 will take place in Stade, Germany. All aspects of large-scale space, i. e. spaces too large to be seen from a single vantage point, are addressed in the COSIT conferences. These include spaces of geographic scale, as well as smaller spaces in which humans, animals, or autonomous robots have to find their way around. Spatial information theory also deals with the description of objects, processes, or events in spatial environments and it forms the foundation for the construction of Geographic Information Systems (GIS) and for spatial information and communication system design in general.