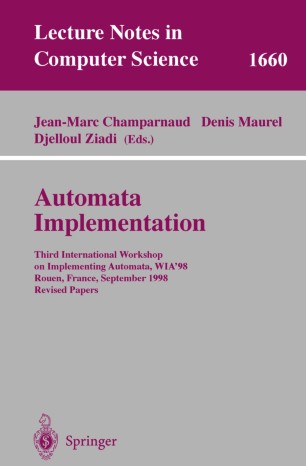 The papers contained in this volume were presented at the third international Workshop on Implementing Automata, held September 17{19,1998, at the U- versity of Rouen, France. Automata theory is the cornerstone of computer science theory. While there is much practical experience with using automata, this work covers diverse - eas,includingparsing,computationallinguistics,speechrecognition,textsear- ing,device controllers,distributed systems, andprotocolanalysis.Consequently, techniques that have been discovered in one area may not be known in another. In addition, there is a growing number of symbolic manipulation environments designed to assist researchers in experimenting with and teaching on automata and their implementation; examples include FLAP, FADELA, AMORE, Fire- Lite, Automate, AGL, Turing’s World, FinITE, INR, and Grail. Developers of such systems have not had a forum in which to expose and compare their work. The purpose of this workshop was to bring together members of the academic, research,andindustrialcommunitieswithaninterestinimplementingautomata, to demonstrate their work and to explain the problems they have been solving. These workshops started in 1996 and 1997 at the University of Western Ontario, London, Ontario, Canada, prompted by Derick Wood and Sheng Yu. The major motivation for starting these workshops was that there had been no single forum in which automata-implementation issues had been discussed. The interest shown in the r st and second workshops demonstrated that there was a need for such a forum. The participation at the third workshop was very interesting: we counted sixty-three registrations, four continents, ten countries, twenty-three universities, and three companies.