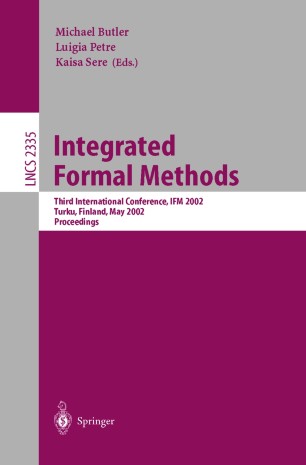 The third in a series of international conferences on Integrated Formal Methods, IFM 2002, was held in Turku, Finland, May 15–17, 2002. Turku, situated in the south western corner of the country, is the former capital of Finland. The ? conference was organized jointly by Abo Akademi University and Turku Centre for Computer Science. The theme of IFM 1999 was the integration of state and behavioral based formalisms. For IFM 2000 this was widened to include all aspects pertaining to the integration of formal methods and formal notations. One of the goals of IFM 2002 was to further investigate these themes. Moreover, IFM 2002 explored the relations between formal methods and graphical notations, especially the industrialstandardlanguageforsoftwaredesign,theUni?edModelingLanguage (UML). The themes of IFM 2002 re?ect what we believe is a growing trend in the Formal Methods and Software Engineering research communities. Over the last threedecades,computerscientistshavedevelopedarangeofformalismsfocusing on particular aspects of behavior or analysis, such as sequential program str- tures,concurrentprogramstructures,dataandinformationstructures,temporal reasoning, deductive proof, and model checking. Much e?ort is now being - voted to integrating these methods in order to combine their advantages and ensure they scale up to industrial needs. Graphical notations are now widely used in software engineering and there is growing recognition of the importance ofprovidingthesewiththeformalunderpinningsandformalanalysiscapabilities found in formal methods.