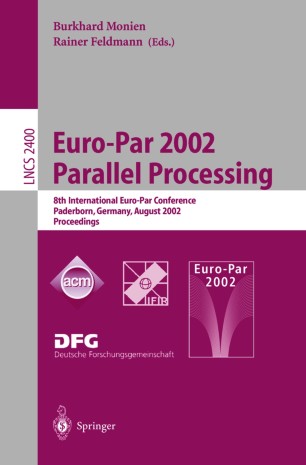 Euro-Par – the European Conference on Parallel Computing – is an international conference series dedicated to the promotion and advancement of all aspects of parallel computing. The major themes can be divided into the broad categories of hardware, software, algorithms, and applications for parallel computing. The objective of Euro-Par is to provide a forum within which to promote the dev- opment of parallel computing both as an industrial technique and an academic discipline, extending the frontiers of both the state of the art and the state of the practice. This is particularlyimportant at a time when parallel computing is undergoing strong and sustained development and experiencing real industrial take-up. The main audience for and participants in Euro-Par are researchers in academic departments, government laboratories, and industrial organizations. Euro-Par aims to become the primarychoice of such professionals for the p- sentation of new results in their speci?c areas. Euro-Par is also interested in applications that demonstrate the e?ectiveness of the main Euro-Par themes. Euro-Par has its own Internet domain with a permanent website where the historyof the conference series is described: http://www. euro-par. org. The Euro-Par conference series is sponsored bythe Association of Computer - chineryand the International Federation of Information Processing. Euro-Par 2002 at Paderborn, Germany Euro-Par 2002 was organized bythe Paderborn Center for Parallel Comput- 2 2 ing (PC ) and was held at the Heinz Nixdorf MuseumsForum (HNF).